The Modern Picture of Ordinary Matter

We are dealing with a set of problems of modern theoretical particle physics. Our approach is phenomenological in principle and attempts to study particles called hadrons. Our set of methods comes from relativistic quantum field theory and is based on the modern theory of the strong interaction, Quantum Chromodynamics.

The most burning questions for us are:

The Strong Interaction in Particle Physics

In modern particle physics, hadrons are understood to experience the strong interaction, which is one of the four fundamental forces of nature. The strong interaction is an important reason for why the world is as it is, and in particular for our very existence. The most well-known hadrons, the proton and the neutron, constitute atomic nuclei. Since protons are positively charged and neutrons are neutral, the nucleus would not be stable without the presence of the strong interaction.

This interaction can be understood theoretically via the concept of quarks and gluons, the elementary particles in quantum chromodynamics, which is believed to be the underlying quantum field theory of the strong interaction. Neither quarks nor gluons can ever reach a particle detector alone, but they appear in certain groups and form bound states, which appear as hadrons. Hadrons with mainly three quarks inside – held together by gluon exchange – are called baryons. Hadrons consisting of mainly a quark and an antiquark – again held together by gluon exchange – are called mesons. Many different mesons and baryons have been found experimentally, and it is the goal of theoretical hadron physics to explain their properties from the underlying theory of quantum chromodynamics.

The work of our group aims at doing this in a certain framework with the help of coupled integral equations. The equations and their solutions have very convenient properties such that hadrons can easily be studied. While it is not possible to use the exact input from quantum chromodynamics, sophisticated models can be constructed that retain important properties of the underlying theory, but are at the same time simple enough to be treatable by present-day numerical methods and computing facilities.

More precisely, emphasis lies on a comprehensive study of hadron (both meson and baryon) masses, in particular regarding their various excited states, for the various kinds of quarks that can be the constituents of the hadrons. Starting with the heaviest quark known to form bound states, the bottom quark, one goal of the project is to find a new effective interaction capable of providing a unified description of meson and baryon properties in the same setup.

Other investigations in the field concern the various possible interactions of hadrons, again both of mesons and baryons, with photons (the electromagnetic interaction), and weak bosons (the weak interaction) as well as with each other (via the strong interaction). Such processes happen in particle accelerators and detectors and need to be understood in order to produce reliable experimental data in particle physics. 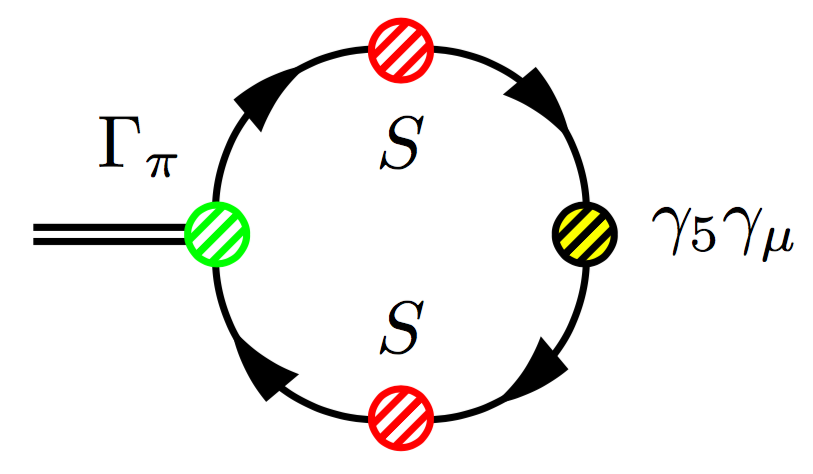